Universal literacy is the key to a social and economic progress 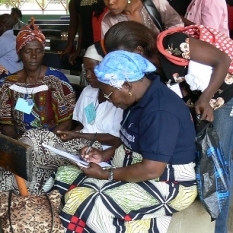 According to the UNESCO General Conference in 1978, a person is functionally literate when he can involve himself in all the activities that are necessary literacy to the effective functioning of his group or community and allow the person to use the reading, writing anda calculation in favor of his own development and the community.

According with this definition, when we are talking about literacy, is to refer to a expended jurisdiction, that achieves to the community through a literate person. It’s an important criterion to consider into the implementation of the differents programs to the literacy, an adult education who develops his capacities and asnwer to all thee needs.

The monitoring report of education to all 2013-2014 says that the universal literacy is fundamental to social and economic progress. The children acquire better skills in readind and writing through a good quality education. A few countries had been able to create solid institutions to an adult education who offers true seconds oportunities to the most unlettered adults. As consequence, the countries, where people traditionally had limited access to the school education, couldn’t until now eradicate the literacy between young adults and adults.

In this World Day of Literacy, we want to have present the Angola social report of 2013 made by the Catolic University of the country. This report says that the education remains to a strategic issue to the economic and social development of the country and a determinant factor of the social progress. Actually and with rigor, as higher a opportunity of education was given to the citizens, higher possibility will be for those citizens to participate in the public, economic, social, cultural life of the country and, consequently, in his development.

It isn’t possible to promote the developmente of the country, ensure the social promotion of angolans and integrate the globalization of the development, making the best use, without a strong investment in the initial and continuous acquisition of knowledges, technical capacities and cognitive abilities of the citizens.
In the development framework of the educational policies, in 2013, was formulated and implemented the Accelerated Literacy Program and School (PAAE) and was criated the Nacional Comissiono of Literacy too, as na articulation mechanism between the differents minesterials departments and the society to take care of the literacy problem.

The illiteracy rate, in the coubtry, is calculated about 30% of the angolan population, it is estimated in 21 millions of people according to the projections of INE, that means 6,3 millions of adults. In Luanda was literated about 260,550 adults (64,312 men and 196,238 women). In provinces as Benguela, was literated 103.838 adults (which 66.892 are women). It is a big implication of the women, although the women are the ones that mostly give up. In terms of income of the literacy, it can be noted a prevalence of the women.