Contributing for a better Angola for 19 years 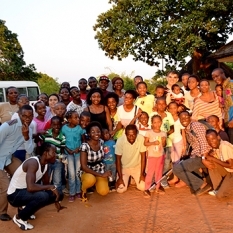 Mosaiko | Citizenship Institute celebrated its 19th work anniversary – aquamarine stone anniversary -on the 20th September 2015. Founded in 1997 by Dominican Friars (Order of the Preachers) it existed under the name Mosaiko Centro cultural until 2011.

Thought out as a project stemming from the Angolan order, its first membes were friar João Domingos, RIP, friar Mário Rui and friar José Sebastião Manuel. Its headquarters were inaugurated on the 20th September 1997 and therefore that was the date chosen as its ‘birthday’, although all of the work in order to implement the project had already started long before. Mosaiko adopted the Human Rights as its core reference.

Today, Mosaiko acts in a variety of ways, namely training community leaders (traditional religious and civil authorities), providing professional training, promoting social weeks, national meetings, conferences and debates. It has a public library, it publishes and distributes publications, it produces radio programs, it offers training and advice to Local Groups for Human Rights. Mosaiko deals with conflict mediation and resolution both directly or through Local Groups for Human Rights. It also provides legal advice to citizens and institutions, and legal support regarding cases of Human Rights violation, as well as research on social matters towards taking action.

At present Mosaiko faces many challenges: to consolidate the accumulated experience, to enlarge / deepen some key areas, to strengthen the cooperation of Angolan institutions and people regarding the work on Human Rights and to find new ways through which people may contribute to help Mosaiko with their knowledge, their time, their financial support or any other way in order to help make Angola a better place.
Mosaiko would like to thank each and everyone that contributed along these 19 years, with their effort and dedication towards the promotion of human dignity and would like to extend this gratitude to all the people that aready worked with the instituiton, namely ex-employees, employees, partners and friends.

May God bless you and give you strength in the pursuit of common good.