Children are the fundamental stem of development, the genesis of the future of Africa and the world. 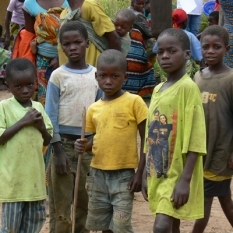 The Day of the African Child commemorates the killing of children in Soweto, South -Africa on June16th 1976, following a civil protest against the compulsory teaching of the Affrikaans language in schools, a demand for formal recognition of the right to learn their mother tongue (not just English), as well as an improvement in the quality of education.
The demonstration lasted 14 days and, although peaceful in nature , ended in extreme violence. Over one hundred people died and nearly a thousand children and young people who were exercising a fundamental right recognized by the Universal Declaration of Human Rights, were injured.
In 1991, the Organisation of African Unity (OAU) chose June 16 as the day to honor these victims and to protect children in Africa. In Africa, we continue to witness the constant violation of fundamental rights of children. Despite all the appeals, the reality is that in Africa, as in other areas of the world, thousands of children continue to starve, victims of extreme poverty , because of diseases caused by malnutrition and a lack of health primary care, among other reasons.
It is the responsibility of States, the Family and the whole of society to work together to protect children with a view to their integral and harmonious development.