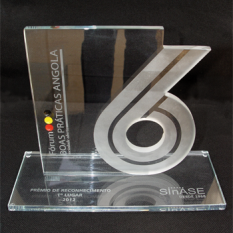 Mosaiko | Institute for Citizenship was the winner of the Angola Good Practices Recognition award, in the category ‘associations.’ The prize was awarded as an acknowledgement for Mosaiko’s contribution to the cooperation between the state and civil society organizations during the process of house demolition and the relocation of inhabitants in the town of Matala (Huila).

This award is organized by the International Certification Company. Selection of the winners is made in collaboration with prominent figures from various sectors of Angolan society.

The awards were presented during SInASE’s Second International Conference on February 29, 2012, at Hotel Tropico, in Luanda. Other state, private sector and third sector insitutions also received prizes.
The Center for Human Rights of Matala, which receives regular training and advice from Mosaiko, played a very important role in the process of house demolition and the relocation of inhabitants in the municipality of Matal.

Mosaiko sees this award as an acknowledgement of the importance for state and civil society organizations to work together for the common good, in a constructive and inclusive manner. But, it also regards it as a tribute to all victims of the house demolition process, who, unlike their fellows in Matala, have to endure immense suffering.

The way that the process of house demolition and population relocation was conducted in the town of Matala should be an encouragement to all those who work for a better Angola!