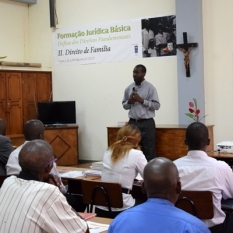 Between the 25th and 29th August

The first unit took place in January of this year and approached relevant issues regarding Angolan Criminal Law. The second unit to take place this year will be approaching Family Law. This second unit on Family Law aims to empower participants with basic knowledge on family matters that most concern communities from the Human Rights Local Groups, as well as sharing experiences on dealing with family conflict mediation.
The opening session on the first day of training was led by fr. Júlio Candeeiro, Mosaiko’s General Director. Following was frei Mário Rui, a member of Mosaiko’s Board, whose lecture approached the first theme regarding the Family in the Present Context.
The meeting’s agenda further includes matters concerning Marriage, counting with the input from Hermenegildo Teotónio, Adviser in Human Rights to Local Groups; Divorce and Non-marital partnerships, with the input from Ismael Tchicambi, officer from the Court of Auditors, Social Worker and a Law student at the course’s final year; Violence in the Family which will be counting with the input from Delma Monteiro, a member of Associação para o Desenvolvimento Rural – ADRA (Association for Rural Development). During the last day of training, participants will be visiting Luanda’s Regional Court and its Family Room.
Training is under the responsibility of Mosaiko and will be led by advisers António Ebo, Francisca Maria Imaculada and Hermenegildo Teotónio and will also count with the logistical support from Osvaldo António.