24 /26 April Centro de Conferências de Belas, Luanda The African Non-Governmental Organizations (NGO)’s for the defense of Human Rights Forum will be taking place in Luanda, at the Belas Conference Centre, between the 24th and 26th of April under the organization of ‘Grupo Técnico de Monitoria dos Direitos Humanos em Angola – GTMDH (the... 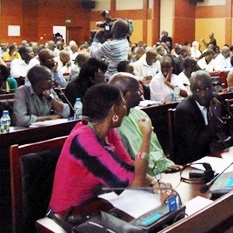 The African Non-Governmental Organizations (NGO)’s for the defense of Human Rights Forum will be taking place in Luanda, at the Belas Conference Centre, between the 24th and 26th of April under the organization of ‘Grupo Técnico de Monitoria dos Direitos Humanos em Angola – GTMDH (the Monitoring Group for Humans Rights in Angola).
The NGOs forum is a platform allowing the exchange of experiences between African NGOs. It was created in 1991 by Centro Africano de Estudos sobre Democracia e Direitos Humanos – ACDHRS (African Center for Studies on Democracy and Human Rights) as a means to promote and protect Human Rights in Africa through an NGO dedicated to Human Rights.
This event precedes the 55th Session of Comissão dos Direitos Humanos e dos Povos CADHP – (the Commission for the People’s and Human Rights) which will be taking place in Luanda for the first time between the 28th April and the 12 May 2014.
As a place for debate the forum gives special focus to the African NGO’s intervention in order to approach the situation of Human Rights in Africa in general and especially in Angola.
The situations regarding Human Rights will be presented at the conference and will be then followed by further discussion among work groups specifically created to approach the issues raised.
In each group apart from citizens and representants from various organizations there will be a Commissioner or Expert from the African Commission who will be drafting a report containing all the recommendations set forth to be subsequently presented to the authorities during the 55th Session of the African Union Commission for the People’s and Human Rights.
It is up to the country’s Civil Society’s Organizations that host the Commission’s session to organize the event. As regards Angola, it is up to Grupo Técnico de Monitoria dos Direitos Humanos em Angola – GTMDH (the Human Rights Monitoring Group).
GTMDH is a platform of Angolan Civil Society Organizations that work towards promoting and defending Human Rights in the Angolan society in which MOSAIKO | Instituto para Cidadania (Institute for the Promotion of Citizenship) is included.
MOSAIKO | Instituto para Cidadania aims to report the difficulties that a large part of the population faces in what regards having access to justice, especially in the country’s inland, as it is conveyed in the Research Report on Access to Justice out of urban centers, a document produced by the Institute that proposes the creation of a Public Defense Institute, by each Court, with competent lawyers or public defense lawyers paid by the State in order to allow for the existence of a true right of defense that is effectively put into practice and not just in paper. The Insti