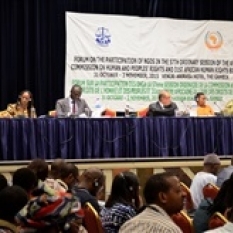 Different human rights situations were presented in the conference and further developed in specific and thematic working groups. The groups discussed the most relevant human rights violations in Africa and the breach of international treaties. The groups consist of representatives of various organizations and citizens, as well as the Commissioners or issue experts of the African Commission. With respect to the human rights situation in the Southern African region, some non-governmental organizations expressed concern about the current situation prevailing in Angola with regard to human rights defenders, the legal situation of Angolan NGOs and the exercise of fundamental rights and freedoms.

Makhuni Makhumbo Muntitali, from the Malawi-based Centre for Human Rights and Rehabilitations , considered ” the situation of freedom of opinion expression, assembly , association and expression in the region to be delicate , especially in Angola , as evidenced by the case of the arrest and detention of 15 young people and three human rights activists . The other aspect is linked to the implementation deficit of the recommendations relating to the work of NGOs in Angola, outputs from the last session of the Universal Periodic Review mechanism, and the presidential decree restricting the activities of NGOs. “

In the panel on the “Commitment to the African Commission against reprisals or threats against human rights defenders, Antonio Ventura, a panel speaker and Director of AJPD, gave a statement highlighting the fact that” the activity of civil society in Angola, above all, the organizations of human rights defenders, are increasingly subject to restrictive measures, citing as examples three cases: first, the legal and administrative constraints imposed by the Executive through Decree No. 74/15 of March 23 that as a result, commercial banks began to require that some associations present a certificate of registration that the Ministry of Justice will not currently provide to them, for example, Mosaiko since 1997, AJPD and Maos Livres since 2000, OMUNGA and SOS-Habitat since 2002. Second, the fact that the Angolan NGOs were initially prevented from making statements during the Commission session held in April 2014 in Luanda due to the influence of a government official, who was only corrected after complaint to the Secretariat. Third, conducting public smear campaigns against human rights advocacy organizations claiming they are at the service of foreign interests, or traitors and even as enemies of the state or political opposition. All these threats or reprisals limit the work to disseminate and promote the African Charter and Human Rights and its Protection Mechanisms.

In short , Reine Alapini – Gansou , Commissioner for Human Rights Defenders , recalled that he ” has been in Angola several times and finds the current situation troubling, since there are already recommendations on the actions of human rights defenders and found that is necessary to strengthen dialogue and cooperation between NGOs and the Government , “. The subjects covered by the panels were also discussed in the Working Groups, through which were produced several country resolutions per theme, including a resolution on the general human rights situation in Angola, and four thematic resolutions on Angola, on the; ” situation of Human rights Defenders,” “Prisons and Arbitrary Detention,” “freedom of expression and opinion ” and finally ” freedoms of association, assembly and demonstration “.

These resolutions will be presented later to the Commissioners, during the 57th African Commission on Human and Peoples ‘Rights and the Heads of States and Governments of the African Union.

The Forum of NGOs is a working mechanism for the exchange of experiences between African NGOs. It was established in 1991 by the African Centre for the Study of Democracy and Human Rights (ACDHRS ) , in order to promote and protect human rights in Africa.